Ambition Addiction: How to Go Slow, Give Thanks, and Discover Joy Within

Join Valley Beit Midrash as we welcome Rabbi Benjamin Shalva for a thought provoking discussion on his latest book, Ambition Addiction: How to Go Slow, Give Thanks, and Discover Joy Within.

About the Author: I am a writer, rabbi, yoga instructor, meditation teacher, and spiritual guide born and raised in Milwaukee, Wisconsin and residing now in Reston, Virginia with my wife, Sara, and our two children.

I received my rabbinical ordination from the Jewish Theological Seminary in New York City. I have served as Rabbinic Advisor for the Harvard University Hillel, Assistant Rabbi for Congregation Olam Tikvah in Fairfax, VA and Senior Rabbi for Temple Reyim in Newton, MA. I also served as a Rabbinic Chaplain for Rikers Island Correctional Facility in New York City and the Nashua Street Jail in Boston.

Currently, I serve as a rabbi, Jewish educator, and song leader for a number of institutions in and around the Greater Washington area, including Adas Israel Congregation and The 6th & I Historic Synagogue. I lead Shabbat and High Holiday services for Bet Mishpachah, Washington D.C.’s LGBTQ synagogue.

I also spend my summers as the Camp Rabbi and the Director of Jewish Programming for Tamarack Camps in Michigan.

AS A YOGA INSTRUCTOR, MEDITATION TEACHER, AND SPIRITUAL GUIDE…

I am a certified Hatha Yoga instructor, having received certification from the Yogic Physical Culture Academy under the guidance of yogic master Tony Sanchez. I have studied yoga for twenty years and maintain a daily personal yoga practice. I teach yoga in studios, gyms, and other venues in the Washington D.C. area and have also created a Yoga & Kabbalah Workshop, which I offer at yoga studios and synagogues throughout the United States.

I am also a teacher of Mindfulness and Jewish meditation. At age 18, I began a practice of Zen Buddhist meditation under the auspices of the Kwan Um School of Zen. I continue a daily meditation practice and enjoy facilitating meditation groups in synagogues, yoga studios, hospitals and prisons, including the Jewish Mindfulness Center of Washington. 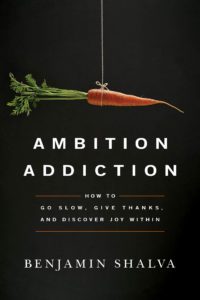 About the Book: Self-described ambition addict Benjamin Shalva (Spiritual Cross-Training) has written an insightful and illuminating book for anyone who wants to control that destructive strain of ambition and live with integrity. He identifies the signs and symptoms of ambition addiction and profiles iconic achievers to help readers identify unhealthy motivations. Then he reveals the five steps to living a fulfilling life of healthy, productive ambition in which grand but elusive fantasies give way to the true happiness of the here and now.