Connecting with the Enemy: A Century of Palestinian-Israeli Joint Nonviolence

Registration for this event is now closed.

Walks ups will be accepted.

Join Valley Beit Midrash as we welcome Sheila Katz for a thought provoking discussion on her latest book, Connecting with the Enemy: A Century of Palestinian-Israeli Joint Nonviolence.

About the Author: Sheila H. Katz, Ph.D, is the author of Connecting with the Enemy: a Century of Palestinian-Israeli Joint Nonviolence. She received a doctorate in Middle East History from Harvard University where she specialized in Palestinian-Israeli relations, organized programs on Middle Eastern women, and taught for eight years. Her first book, Women and Gender in Early Palestinian and Jewish Nationalism (University Press of Florida, 2003), investigates the origins of conflict through the transformation of gender and national identities during the first half of the 20th century. She has published numerous articles and reviews Kandiyoti’s, Gendering the Middle East, the Arab Studies Journal, the International Journal of Middle East Studies, the Middle East Journal, the Association of Middle Eastern Women’s Studies Newsletter, Harvard International Review, and Lilith Magazine. Dr. Katz lived in Jerusalem for six years where she founded one of the early feminist groups and a network for Palestinians and Israelis to confront tough issues together. She led workshops on inequality and becoming allies in Israel, Palestine, Cyprus, Northern Ireland, England, France, Sweden, Italy, Greece, and the U.S. 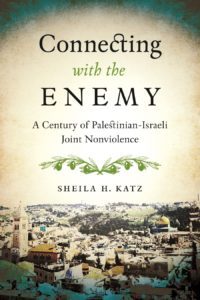 About the Book: Connecting with the Enemy presents the first comprehensive history of unprecedented grassroots efforts to forge nonviolent alternatives to the lethal collision of the two national movements. Bringing to light the work of over five hundred groups, Sheila H. Katz describes how Arabs and Jews, children and elders, artists and activists, educators and students, garage mechanics and physicists, and lawyers and prisoners have spoken truth to power, protected the environment, demonstrated peacefully, mourned together, stood in resistance and solidarity, and advocated for justice and security. She also critiques and assesses the significance of their work and explores why these good-will efforts have not yet managed to end the conflict or occupation. This previously untold story of Palestinian-Israeli joint nonviolence will challenge the mainstream narratives of terror and despair, monsters and heroes, that help to perpetuate the conflict. It will also inspire and encourage anyone grappling with social change, peace and war, oppression and inequality, and grassroots activism anywhere in the world.