Registration for this event is now closed.

Walks ups will be accepted.

Join Valley Beit Midrash as we welcome Professor Jeremy Dauber for a thought-provoking discussion on his latest book, Jewish Comedy: A Serious History.

About the Author: Jeremy Dauber is the Atran Professor of Yiddish Language, Literature, and Culture at Columbia University, where he also serves as director of its Institute for Israel and Jewish Studies and teaches in the American Studies program. He received his undergraduate degree summa cum laude from Harvard and his doctorate from the University of Oxford, which he attended as a Rhodes Scholar. His previous books include In the Demon’s Bedroom: Yiddish Literature and the Early Modern and Antonio’s Devils: Writers of the Jewish Enlightenment and the Birth of Modern Hebrew and Yiddish Literature; his book, The Worlds of Sholem Aleichem, a biography of the Yiddish writer who invented Tevye; the Huffington Post called it one of the fall’s hottest biographies. He frequently lectures on topics related to Jewish literature, history, humor, and popular culture at the 92nd St Y and other venues throughout the United States. 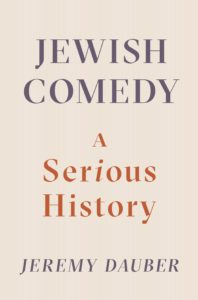 About the Book: In a major work of scholarship both erudite and very funny, Jeremy Dauber traces the origins of Jewish comedy and its development from biblical times to the age of Twitter. Organizing his book thematically into what he calls the seven strands of Jewish comedy (including the Satirical, the Witty, and the Vulgar), Dauber explores the ways Jewish comedy has dealt with persecution, assimilation, and diaspora through the ages. He explains the rise and fall of popular comic archetypes such as the Jewish mother, the JAP, and the schlemiel and schlimazel. He also explores an enormous range of comic masterpieces, from the Book of Esther, Talmudic rabbi jokes, Yiddish satires, Borscht Belt skits, Seinfeld, and Curb Your Enthusiasm to the work of such masters as Sholem Aleichem, Franz Kafka, the Marx Brothers, Woody Allen, Joan Rivers, Philip Roth, Sarah Silverman, and Jon Stewart.