Next Generation Judaism: How College Students and Hillel Can Help Reinvent Jewish Organizations

Join Valley Beit Midrash as we welcome Rabbi Mike Uram for a thought provoking discussion on his latest book, Next Generation Judaism: How College Students and Hillel Can Help Reinvent Jewish Organizations.

About the Author: Rabbi Mike Uram is the Executive Director and Campus Rabbi for the Hillel at University of Pennsylvania and the author of the new book entitled, Next Generation Judaism: How College Students and Hillel Can Help Reinvent Jewish Organizations, which recently won a National Jewish Book Award. He is a sought-after speaker and consultant on the changing nature of the American Jewish community, Jewish innovation, cutting-edge engagement and how legacy organizations can reinvent themselves in the age of millennials.

Mike has offered keynote addresses, led workshops and served as scholar-in-residence at dozens of Jewish organizations including Jewish Federations of North America, The Wexner Foundation, United Synagogue, The Rabbinical Assembly, Central Conference of American Rabbis, Hillel International and many local federations, synagogues, and JCCs. Mike currently serves as lead faculty and Jewish coach for the Schusterman Fellowship, a prestigious leadership development program for the most promising talent in the Jewish professional sector.

Mike recently won the Edgar Bronfman Award that recognizes outstanding achievement and leadership within the Hillel movement. In 2012, Mike was named to the Forward list of the 50 most influential leaders that year. In the spring of 2012, Mike received the Ally of the Year award from AIPAC for his campus work during the Penn BDS Conference. In the winter of 2007, Mike received Hillel’s highest award for professional achievement, the Richard M. Joel Exemplar of Excellence. He has written a number of articles and is currently writing a monthly column for philly.com. Mike helped to create a Jewish engagement ‘start-up’ called the Jewish Renaissance Project (JRP) that reaches thousands of students on the Jewish periphery with cutting-edge methods for building alternative Jewish communities and delivering content-rich Jewish experiences. JRP was recently included in the 2014-2015 Slingshot guide for most innovative Jewish organizations in North America.

He has spent time in all of the different denominations and is most passionate about breaking down the personal, spiritual and intellectual boundaries that prevent people from having full self-actualized Jewish identities.

Mike holds a BA in History and Religious Studies from Washington University and Rabbinic Ordination from the Jewish Theological Seminary. He lives outside Philadelphia with his wife Leora and their children Avital, Benjamin and Coby. 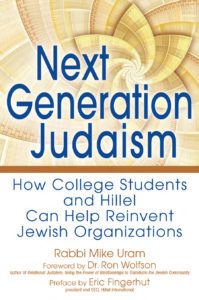 About the Book: The Jewish world is changing before our eyes. The traditional notions of what it means to be a Jew, what Jewish organizations look like and what Jewish leadership means are no longer working, leaving many Jewish organizations in a struggle for survival. Many Jewish leaders are afraid that this will only get worse as the millennials―the “my way, right away, why pay” generation―begin to enter adulthood. This is an essential resource for lay leaders, rabbis, cantors and anyone who wants to build a brighter Jewish future for all Jews and the institutions that support them.