I hope that you all had an enjoyable long Independence Day weekend, our annual celebration of nationhood and the commemoration of the Declaration of Independence, asserting America’s independence from Great Britain.

Our country is still very young, in relative terms, at 245 years of age. And like so many recent holidays and traditions in our country over the past few years, there is a lot of questioning and reexamination of our history and who and where we are as a nation.

One area of reexamination for me personally this Fourth is the use of fireworks. For many, this is a major part of their expression of the holiday. As a dog owner, I am saddened by how upset and anxious the loud explosions make my dog. I also took notice of the tragic death of Columbus Blue Jackets goalie Matiss Kivlenieks, a 24-year-old who was hit by a mortar-style firework while at a party. No easy answers here. Just concern and food for thought.

On a positive note, as many of you are already aware, Arizona House Bill 2241, known as the Holocaust Education Bill, passed in the Senate on Wednesday, June 30, ending a more than three-year effort to ensure Holocaust education is taught in Arizona’s public schools. The bill, which unanimously passed the House of Representatives in early February, received a vote of 27 to 2 in the Senate. HB2241 is now headed to Gov. Ducey’s office for signature. According to Rep. Alma Hernandez, “Knowing that all Arizona students will learn about the Holocaust gives me hope and restores my faith in humanity because we must teach the past to ensure it never happens again. I can finally say I have never been prouder to be an elected official and a Jew in Arizona.” There are many who contributed to this historic legislation, including two wonderful young activists, Michael Beller and Josh Kay, who began their journey conceptualizing and fighting for this bill on one of our Jewish Federation of Greater Phoenix men’s missions to Israel just a couple of years ago. I couldn’t be prouder of them. 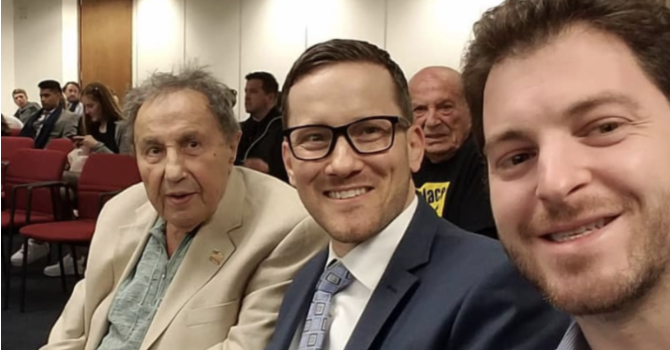 From left to right: Dr. Alexander White (who was 270 on Schindler’s List), Michael Beller and Josh Kay.

This week’s double Torah portion is Matot (Tribes) Massei (Journeys) and focuses on spoils of war and dividing up portions of the Promised Land. The 42 journeys and encampments are listed from the Exodus to the encampment of the plains of Moab. Re-reading and experiencing our journey as a Jewish nation thousands of years ago reminds me that here in America we too are a collective of many different groups of peoples from all over this world forming an unprecedented mosaic that continues its most impressive evolution these past 245 years. And, with all its flaws and imperfections, is a light unto the world. I am so proud to be a Jewish American today and every day.

Wishing you all a Shabbat Shalom.

Subscribe to receive Marty’s Shabbat Message in your inbox each week.